Simon Desue Wohnhaus is a 27-year-old famous video producer and entertainer with 4 million subscribers on Youtube based in Hamburg, Germany. The young and energetic content creator, alongside his girlfriend Enisa Bukvic posted a series of videos which caught the attention of prosecutors. The couple filmed themselves buying a coffee machine from Saturn electronics stores with what they claim to be counterfeit money purchased from the Darkweb.

In the first video posted on Monday 31st of December 2018, Simon explains how he bought a trolley off the darknet which contained a laptop filled with images depicting paranormal activities, webcam hacking servers, and a text file with multiple onion addresses to drug and counterfeit websites.

In a second video posted on Thursday 3rd of January 2019, Simon asks for 20 thousand likes to complete the ‘challenge:’ going to a store and buying something with the fake money. He claimed to have purchased 10 thousand counterfeit euros.

Shortly after, on 4th of January 2019, Simon uploaded the third video of him and his girlfriend successfully buying a coffee machine at Saturn electronics in Mönckebergstraße, Hamburg with 50 euro banknotes. The purchase was recorded by the couple with a hidden camera. More interestingly, at the end of the video, Simon asked for another 20 thousand likes to get the money stack banderole checked at the bank. However, such video would never see the light of day due to a raid and subsequent confiscation of the fake money by the Landeskriminalamt (LKA) police.

Police spokesman Florian Abbenseth confirmed the ongoing investigation against Simon on counts of counterfeiting. A mandated raid by the State Criminal Police Office in Simon’s home resulted in the seizure of 9850 euros fake money. Florian Abbenseth explains that even if the money was real, there has to be an evaluation regarding public instigation to commit fiscal fraud.

Prison term or not, Simon is to be expected to receive heavy fines up to tens of thousands of euros for his actions. Similar cases such as those of ApoRed and Leon Machère resulted in substantial penalties for different pranks or public manifestations. 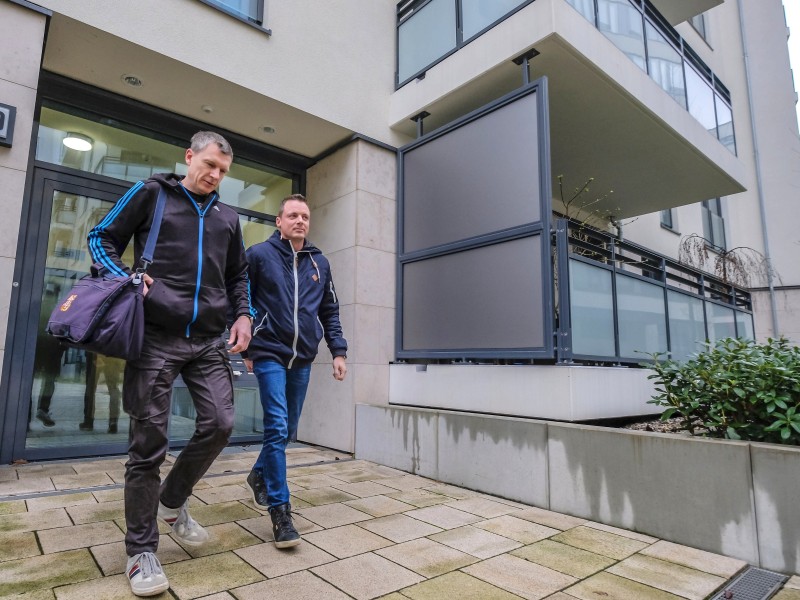 LKA officials leave the apartment of Simon Desue after raiding it. Photo by M. Arning