The Postal Police of Cagliari, Sardinia, Italy apprehended a 28-year-old man for solicitation of minors, possession of child pornography, and a third accusation pending investigation. He is indicted for luring three 10-year-olds over the general chat in popular video games and for possession of highly disturbing child pornography. Prosecutors found that in at least one instance, the man offered a €10 Fortnite gift card as bait to one of the children involved in the inquiry.

The investigation began when two mothers of the three children alarmed the police after recognizing suspicious behavior from their respective child.
As described by one of the mothers, her son began to act strangely, especially at night. He desperately wanted to be alone and even shoved his sister out of his room.

More so, after winning the victim’s trust in gaming chats, the pervert would move to WhatsApp to request sexual pictures and videos of the kids. The sexual predator had a lot in common with the infamous “Bored Group,” and pretended to be a 16-year-old teenager or even a 9-year-old.

On 10th of January 2019, a raid was executed at the residence of the accused. His telephone and PC revealed 24 video chats in which the children undress, violent and necrophiliac videos of children, and other highly antisocial media.

“I know I’m sick,” the suspect told the officers.

More worrying is that the fact that the man was known to the authorities for another story related to child pornography in which he had a marginal position. It’s the first time in Italy a pedophile was actively searching victims in such a manner. According to Italian law, he’s risking imprisonment from six to twelve years and fines from €25,822 to € 258,228.

Interview in Italian with officer Francesco Greco (second from left) in which he briefly explains the investigation and warns parents about the dangers of letting kids play video games unsupervised. Report from the conference in Cagliari about the case, courtesy of www.unionesarda.it 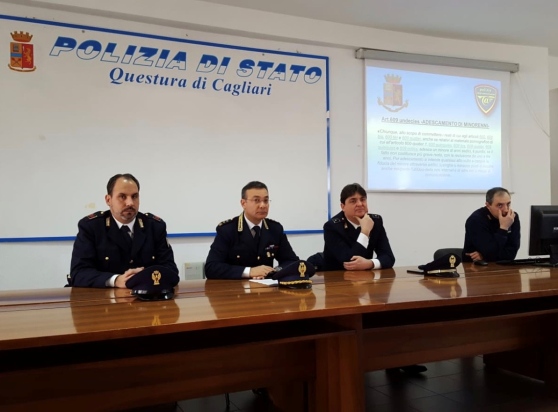