Code-named operation “Bitcoin,” sponsored by the Italian public ministry of
Benedetto Roberti has successfully ended with the capture of 100 kilograms of drugs, €200.000 in cash, and thirteen suspects sent in court on various accusations of money laundering and narcotics trafficking as of 23 of January 2019.

An underworld criminal gang known as the Lovato clan from Padova, Italy was raided on 9th of October 2018 after almost two years of infiltrating undercover agents, surveillance, and intranet monitoring — the group conducted the majority of its business through the darknet. The months of hard detective work by the Mobile Squad of Padova Police Headquarters culminated in a break-and-enter raid which resulted in the arrest of 9 people, 100 kg of drugs, and €200,000 in cash.

Among the accused, is the leader of the gang Emanuele “Dottore” Lovato. A 35-year-old man originally from Verona who was in charge of the “Alexander” bar in San Francesco street.

More so, Lovato’s trusted friend, 21-year-old Piero Pasqualin is also going to court. Piero is a bass player originally from Treviso, cited as one of the thirteen suspects. Piero was in charge of Lovato’s financials. He would convert money into cryptocurrency, order drugs from the deep web, communicate with the sellers via encrypted messaging through Wicker app, and would personally unload the parcels as seen in the police surveillance photos. 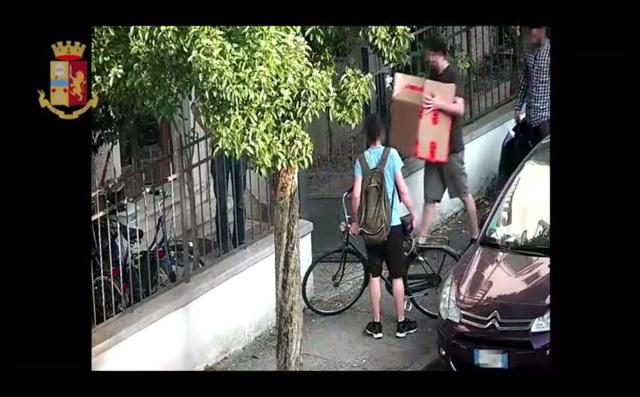 Millions of euros were spent on the darkweb to buy drugs from Spain and The Netherlands through Bitcoin and Ethereum. Police estimate a total profit of €20 million which were partially laundered by Emanuele Lovato and another accomplice Marte Denyz Akyil. Both received accusations of money laundering and fiscal fraud.

Lovato was renting a €1,600 villa in Mentana street where he accommodated three of his associates: 30-year-old Raul Buta, 24-year-old Omar Abo Rai, and 29-years-old Marte Denyz Akyil. In the villa, the police found 20 kilograms of drugs cleverly hidden in a modified piece of furniture.

Furthermore, the ringleader kept drugs in his own house where he was living with his concubine Marianna Zoia. More drugs were found in two other apartments, one in Belzoni street and one in Lepanto street, both pertaining to the couple.

The chain of raids started with a breakthrough in Milan where police entered the residence of father and son Claudio and Andrea La Rosa. The duo was storing the bulk of the drugs before sending it to Padova via the courier. Police found the €205.000 in their house.

The main courier for the large drug parcels was 20-year old Francesco Di Maria who was arrested in June 2018 with 11 kilograms of marijuana at an Autogrill highway stop in the proximity of Limenella. The policemen became suspicious of a Citroen C1 car parked in the service area for too long, under the sun with the air conditioner on. The car resulted to be leased from Milan, and upon searching, they found 11 kilograms of marijuana divided in packs of one kilogram. By searching the car’s GPS, the policemen tracked the destination to a warehouse in Milan where they found 39 kilograms of marijuana and packaging material of an estimated value of €300.000 in street money.

Another stash house was located in Turin, 27-year-old Lorenzo Dal Fabbro was arrested, alongside 24-year-old Abo Raia. A total of 16 different raids were executed.

The organization was trafficking large quantities of drugs through the city of Santo. As a helping hand, Lovato involved his 37-year-old concubine, Marianna Zoia who initially denied any form of involvement. Furthermore, many other acquaintances were working for the “Doctor,” as Lovato was known locally: couriers, students, bass players, and singers, even “runners” that would get paid €100 a day to do Lovato’s bidding.

On 28th of December 2018, the public prosecutor solicited the immediate judgment of Emanuele Lovato, Marianna Zoia, Raul Buta, and Lorenzo Dal Fabbro, considered the dome of the organization. Now the process also opens up for the accomplices. They are facing a minimum of ten years of incarceration.